Good afternoon lovely people! It’s been a while but Mr Smithers is back in the room at long last. Apologies for the slightly prolonged absence – Christmas felt never bloody ending and January has been complete and utter chaos, which I’ve discovered is impossible to make look good. My cool has definitely slipped a few times throughout the month.

I digress. I hope 2016 is treating you well so far. This cold snap is doing nothing to ease my mood and I could seriously do without what feels like a daily dose of legendary characters passing away – RIP Lemmy, Bowie, Rickman and Wogan. However, I’ve decided to put the January blues behind me and start the year on a good footing. As you know by now, I’m no do-gooder and this may run the risk of sounding like an Obama speech, but I have wanted to get involved in some sort of charity work with Smithers for a while now and I’ve finally made the decision to go for it having stumbled across a brilliant local charity with an awe inspiring founder.

Trying to choose a charity is a bit of a minefield and definitely pulls at the heart strings (or swinging brick in my case), so when a member of the Smithers’ team introduced me to The Matt Hampson Foundation and its ethos of “Get Busy Living”, it immediately appealed to me.[huge_it_share]

In 2005, England Under 21 Rugby star Matt Hampson suffered life changing injuries during a training session, which resulted in him being paralysed from the neck down and breathing via the aid of a ventilator. Whilst some may deem this as the beginning of the end, that was absolutely not the case for Matt, who has since battled hard to live as normal a life as possible.

Never one to wallow in self pity, other peoples suffering was never far from Matt’s mind and in December 2010 The Matt Hampson Foundation was formed with a mission to inspire and support young people also seriously injured through sport. Awe inspiring doesn’t quite cover it, does it?! I’m not sure I would have had the same admirable disposition faced with that scenario.  Matt works tirelessly within the foundation mentoring, providing friendship and advice, fundraising and delivering inspirational talks to young people and businesses around the country. With a great team behind him and a healthy stream of ambassadors, we couldn’t be happier to finally be getting involved with Team Hambo!

So this March we will be hosting our Smither’s Marvel-lous Online Charity Auction on the 1st and the Auction will run until the 2nd of April, with all proceeds to go to the Matt Hampson Foundation in a bid to help continue Matt’s great work and contribute to supporting others now facing the same path. We like March a lot – Stamford Mid Lent arrives, lots of Easter chocolate to scoff and you can kid yourself its almost Spring! Tuesday 1st March sees the start of our auction, which will run for an entire month to ensure we squeeze every last charitable penny out of you lovely people! 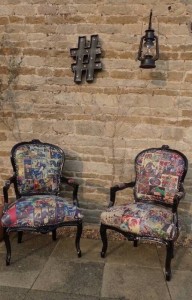 Our Marvel-lous Auction will consist of bidding on our very last Marvel Chair. Our Comic Strip Collection has always proved very popular but all good things must come to an end, so this is your very last opportunity to get in on the retro comic action. Plus, we think Matt is the Daddy of all Super Hero’s so what could be more fitting?!

Click on the link to sign up for the auction and keep your eyes peeled for more details to come. If you want to take a look at what amazing things Matt gets up to then pay his website a visit.
matthampsonfoundation.

Until next time my friends.